Workers trimmed away overgrown weeds on the edges of the pathways and sidewalks along Pancheri.  Scores of cars parked on the roadsides.  Preparation is important.  People pulled out their lawn chairs.  A mother breastfed her baby.  Little girls twirled and danced.

Making truck-honking hand signals, the kids invited the ongoing traffic to join in the celebration.  Drivers became instant stars as they beeped.  Everybody cheered. I laughed out loud at the Poops Away Pet Service van.  I noticed the lady driver laughing, too.

As we waited, the anticipation mounted.

First came the music.  The Skyline pep band marched, beating out a triumphant affair.  Smiling and waving at everybody, their director biked on a tandem.  Then came the football teams and school royalty, followed by other school sports teams and clubs.  I saw diversity, all kinds of different groups but united together in festivity and throwing candy everywhere.  They all proudly wore their color. 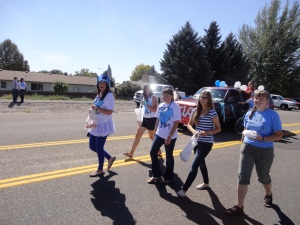 I watched as one man in military uniform stopped his truck, halted the parade, stepped out, and gave a rolled-up t-shirt to a young, grinning boy in a wheelchair.

This event today reminded me of a homecoming that is going to happen on a world scale.

Jesus says in the last chapter of the Bible,

And behold, I am coming quickly, and My reward is with Me, to give to every one according to his work.  I am the Alpha and the Omega, the Beginning and the End, the First and the Last.

The King is coming.  It is going to be loud. With Him, there will be people groups and tribes from North, Central, and South America, Asia, Africa, Australia, etc. — all of them a display of His glory.   From the patriarchs to the apostles to the martyrs, they will be wearing the same colors and holding the banners high.  The King, who is the Bright and Morning Star, will break through the evil night.  He will minister to and crown the afflicted.

And what should be our response in Idaho Falls?

Even so, come Lord Jesus!